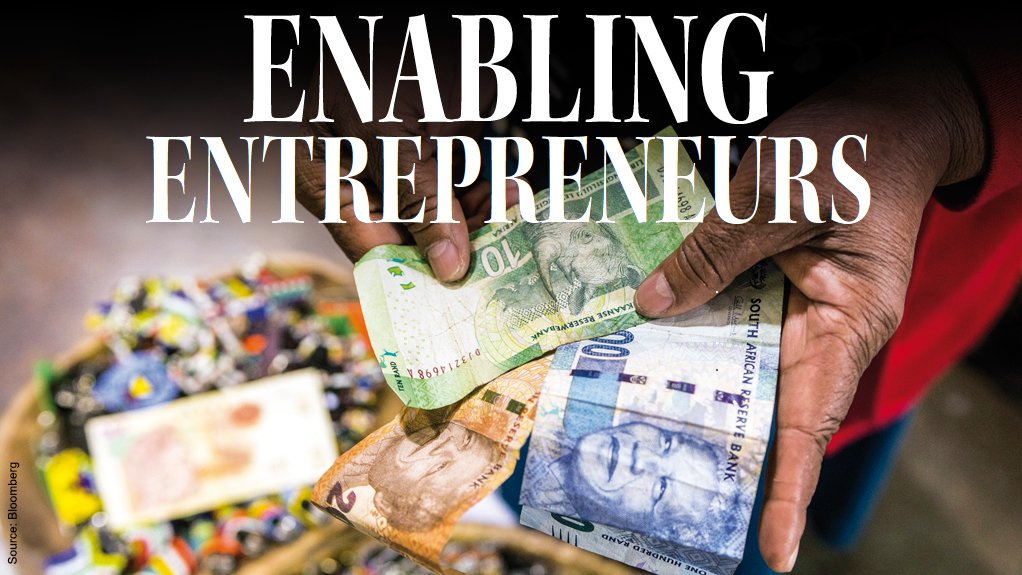 Amid fiscal constraints, political uncertainties and extremely weak economic growth, South Africa is finally placing increasing emphasis on enterprise development and cultivating an entrepreneurship culture. Epitomising this shift in emphasis, Small Business Development Minister Lindiwe Zulu said recently that there was a growing determination to “build a nation of entrepreneurs” in light of a growing recognition that small, medium-sized and microenterprises (SMMEs) would be the drivers of growth and job creation.

Delivering a public lecture at the University of the Witwatersrand Business School in June, Zulu outlined the Department of Small Business Development’s (DSBD’s) agenda in advancing SMME and cooperative development, in line with the aspirations of the National Development Plan (NDP). However, she acknowledged that greater coordination and support was still required from government and established businesses if the full potential of the country’s entrepreneurs was to be actualised.

There are currently 2.8-million small and medium-sized businesses in South Africa, contributing more than 50% to the country’s gross domestic product and 60% to employment, according to Department of Trade and Industry estimates.

In pursuit of this vision, the DSBD has set a “bold” target of increasing the number of jobs created by this sector from 7.1-million to 9.2-million by 2019.

Further, government has set aside 30% of its procurement spend for SMMEs, which Entrepreneur of the Year competition spokesperson Kobus Engelbrecht described as “encouraging” in a statement released by Business Partners last month.

This, paired with the introduction of a central procurement database and eTender system by the National Treasury, could serve to stimulate entrepreneurship, he added.

Challenged State
Despite this specific type of business drive gaining impetus, the ‘Global Entrepreneurship Monitor South African Report 2015/16’ has highlighted some key concerns regarding the state of entrepreneurship in the country.

Entrepreneurial intentions among South Africans dropped by almost 30% in 2015 when compared with 2013, and almost halved when compared with 2010, according to the report. Yet, these perceived opportunities increased over the same period.
The report shows that perceptions about entrepreneurship have increased since 2009, with 40.9% of South African adults in 2015 perceiving good entrepreneurial opportunities. This was up from 37.8% and 25.4% in 2013 and 2009 respectively.

These perceived capabilities – among those South Africans who believe that they have the necessary skills, knowledge and experience to start a business – also increased to 45.4%. This was up from 42.7% in 2013 and 35.5% in 2009.

“Despite these positive indicators, the figures haven’t translated into higher entrepreneurial intention figures, which sharply declined from 19.6% in 2010 to just 10.9% in 2015. This ultimately means that one in ten South African adults currently has these specific intentions,” Engelbrecht said.

He believes that the declining economy, exacerbated by a prolonged fear of a ratings downgrade, contributed to these entrepreneurial lows. Local economic growth slowed from 3.1% in 2010 to 1.3% in 2015, while new reports suggest that it will grow by only 0.4% this year.

While he noted in the statement that the 2010 FIFA World Cup and the build-up towards it had created many business opportunities for existing and aspiring entrepreneurs, thereby stimulating this type of activity, the ensuing years failed to present similar excitement around this type of business.

This was despite public and private initiatives to support entrepreneurs, including black economic-empowerment policies and enterprise development programmes, Engelbrecht said.

Business Partners executive director Christo Botes adds that entrepreneurship, according to the recently released ‘Social Profile of Youth 2009 – 2014’ report, is declining, while youth unemployment is increasing in South Africa. The report indicates that the number of youth entrepreneurs declined from 609 000 in 2009 to 543 000 in 2014.

To reverse this trend, South African youth need to be equipped with the necessary skills and knowledge to start a small business. “Many youth have an entrepreneurial mindset, but simply don’t have either the necessary skills or access to resources to take an idea and turn it into a successful start-up business,” he laments.

Nevertheless, Engelbrecht highlighted that the long-term effects created by the restructuring of institutions to stimulate youth entrepreneurial activity – such as the Umsobomvu Youth Fund, which had been established to finance young entrepreneurs – “cannot be underestimated”.

Additionally, the effects of the financial crisis in 2008 and 2009 continue to cast a shadow over the local and global economy, with banks and other financiers seemingly becoming more cautious in their approval processes, thereby making access to business finance more difficult for aspiring entrepreneurs, Engelbrecht noted.

Moreover, South Africa is “[not] fully supporting these individuals enough to truly maximise their potential”. The report states that the three main constraints limiting entrepreneurial activity include government policy (61%), access to finance (44%) and education and training (42%).

Although a lack of government support is cited as a key challenge, Deloitte Consulting manager and entrepreneurial mentor Joshua Maluleke disagrees, emphasising that “entrepreneurs are not meant to be babysat”.

“South Africans need to be more entrepreneurial and not just rely on government and the private sector to give . . . handouts,” he says. Maluleke is also the author of Entrepreneurship 101: Tackling the Basics of Business.

He believes that key to these challenges is the misconception of what it entails, stressing that entrepreneurs “should not only be business- people but must also create businesses that makes a difference in the communities”.

Consequently, Maluleke aims to educate South Africans through his book about the fundamentals of entrepreneurship through helping aspirant entrepreneurs understand the very basics of running a business.

Another misconception is access to funding, with Maluleke noting “an overemphasis . . . that capital is a key enabler to business success”. Emphasising that not all businesses are capital intensive, he quotes business icon Raymond Ackerman, who noted that business success was 90% passion and 10% capital.

Maluleke further highlights South Africa’s “flawed education system” in this regard, as there is little to no entrepreneurial education and training, with learners and students educated to become employees.

“[Students] should not only look for employment but . . . also come out with business plans looking for platforms and opportunities to be employers,” he says.

This is a key area in which government, in partnership with the private sector, should improve on, as the private sector has the required experience and skills base to support this industry, Maluleke suggests.

Knowledge should also be cultivated during primary education to develop a good entrepreneurship culture, while upskilling of entrepreneurs is also required, he avers.

“We must change our attitude towards entrepreneurship – it should be promoted as a viable career, not just a short-term intervention to solve historical economic challenges,” Maluleke asserts.

Coordinated Alignment
Maluleke believes, however, that the South African entrepreneurship ecosystem “is quite fragmented”, as various government entities are operating in silos to promote this type of enterprise development.

Similar to Zulu’s other sentiments at the Southern African International Trade Exhibition in Johannesburg last month, he stresses the need for enhanced national coordination, particularly with the private sector.

Epstein agrees, noting that it would be a “positive opportunity” for organisations, such as Sage, to work with government to provide SMMEs with advice and help them face challenges, such as regulatory compliance, access to finance, skills development and mentoring.

Private-sector support is rising, following the announcement in May that it will set aside R1.5-billion to help SMMEs. Similarly, Business Partners disbursed R966.2-million in funding through 307 investment transactions during its 2015/16 financial year under review, while several private companies have rolled out successful programmes, such as South African Breweries’ (SAB’s) flagship youth entrepreneurship development programme SAB KickStart.

Future Blueprint
While Maluleke does not believe much will change in the South African entrepreneurial landscape until key role-players “come to the party”, he has initiated talks with Zulu and also Deputy Minister in the Presidency for Youth Development Buti Manamela, who gave a keynote address at Maluleke’s Deloitte book launch in Johannesburg, Gauteng, at the beginning of the month.

Noting that planning sessions with the relevant stakeholders are in the pipeline to conceptualise the coordinated alignment for entrepreneurship development, Maluleke hopes for “some progress . . . [an alignment] blueprint of sorts to what is needed” before the end of the year.

“We need to align our efforts towards promoting the theory and practice of entrepreneurship in the country . . . because it can really be a game changer to improve the economic fortunes of our country,” he concludes.