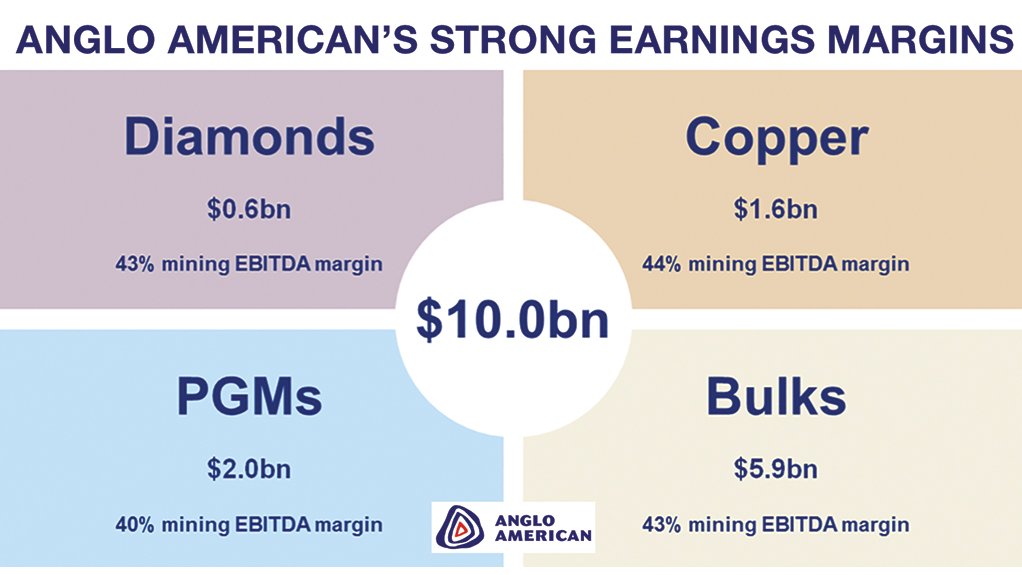 The 2019 earnings before interest, taxes, depreciation and amortisation (Ebitda) margins of the London- and Johannesburg-listed diversified mining company ranged from 40% to 44% in the 12 months to end December. (Also see attached earnings graphic).

The producer of diamonds, copper, platinum group metals and iron-ore generated an underlying Ebitda of $10-billion, a 9% increase, and $2.3-billion of attributable free cash flow.

“Our new projects have better margins than our current averages,” Cutifani said in response to Mining Weekly during a media conference.

The products of Anglo American play precisely to the macro global demand for a cleaner, greener and more sustainable world.

“We have high-return quick-payback growth options within our portfolio,” Cutifani said.

“We’re in a growth phase and at the same time we’re improving our margins from let’s say 40% to 45%, to 45% to 50%, because the new projects have better margins than our current averages.

“So, for us it’s an exciting time and certainly, when we talk to the upside, we can point to a number of things that differentiate us from our competitors,” he added.

On the potential impact of the coronavirus on diamonds and iron-ore sales, he said: “We think the coronavirus is more of a shorter-term issue. The differentiating news for us is that we’re less reliant on China than most of our competitors. Our sweet spot in iron-ore is we’ve got very high quality so we tend to get preference. We haven’t seen major changes.There are some changes occurring, but we are starting to hear that things are beginning to move along a little bit.

“There’s no doubt there aren't as many people today walking around diamond  jewellery shops in China, so the coronavirus will have an impact, but at the moment, we’ve seen a good US selling season. Certainly the sentiment seems to be much better in the diamond first sale. All of those issues are going in the right direction. But at this stage we don’t see anything that suggests we should adjust our guidance on the basis. We're seeing negatives in China but positives elsewhere and the sentiment still seems to be holding up pretty well. No reason for us to adjust at this stage. It'll probably be another couple of months before we get a better picture."

Anglo American has retained its diamond production guidance at 32-million to 34-million carats, which is roughly two- to three-million more carats than in 2019. It also has four-million to five-million worth of inventory to sell down this year.

Amid weak demand, De Beers had cut back on production in 2019. It produced 30.8-million carats, compared with the 35.3-million carats produced in 2018.