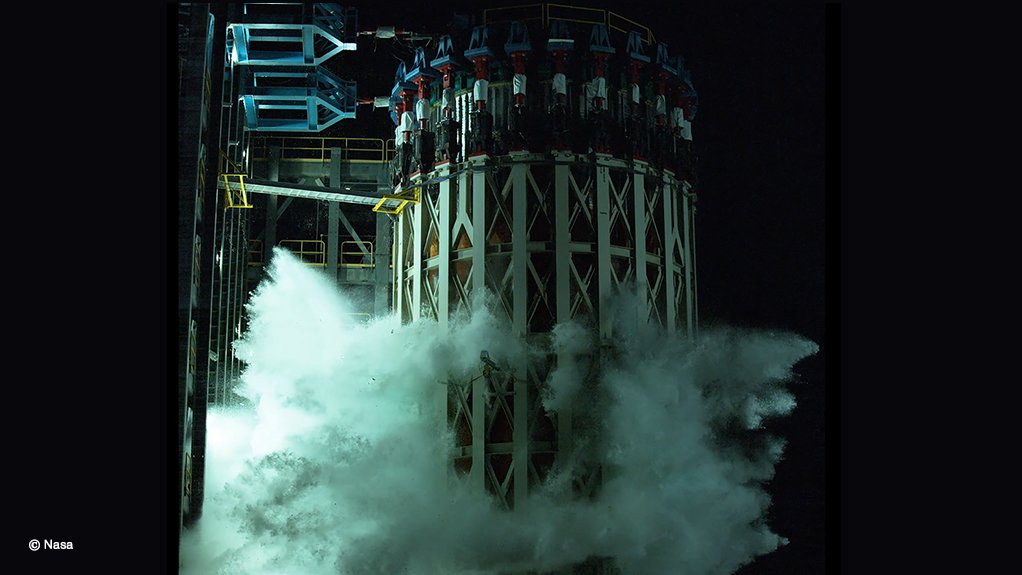 Photo by: Nasa
The moment the SLS liquid oxygen tank failed during its final, destructive, test

The National Aeronautics and Space Administration (Nasa) – the US space agency – has announced that the structural testing campaign for its new Space Launch System (SLS) was completed on June 24. The SLS is Nasa’s new heavy rocket, which will launch into space its upcoming Artemis crewed Moon missions. The tests were conducted at Nasa’s Marshall Space Flight Centre (SFC) at Huntsville in the US State of Alabama.

The final test saw the rocket’s liquid oxygen tank tested to destruction. This component has a height of 70 feet (21.34 m) and a diameter of 28 feet (8.53 m). The tests were conducted in Marshall’s Test Stand 4697, which was built with the testing of the SLS liquid oxygen tank in mind (although it will also be used for other tests in the future).

The test tank was bolted into a 185 000 lb (83 915 kg) steel ring in the test stand. Hydraulic cylinders were placed along it and calibrated before being used to exert huge pressures (“millions of pounds”, in Nasa’s words) on the water-filled tank, which was purposely stressed beyond its limits. It failed where the engineers had predicted it would and within 2% of the predicted load levels. The results proved that the tank was flight ready, as well as providing very important data for its designers.

Prior to the final, destructive test, the liquid oxygen tank had been subjected to 24 “baseline” tests simulating actual flight conditions. These tests were carried out by engineers from both Nasa and Boeing, which is the prime contractor for the SLS core stage. These tests involved the use of high-speed cameras, microphones and thousands of other sensors measuring pressure, stress and temperature. These tests produced data that helped qualify for flight the structures of SLS core stage and the integrated upper stage.

“The Space Launch System and Marshall test team have done a tremendous job of accomplishing this test programme, marking a major milestone not only for the SLS Programme but also for the Artemis programme,” highlighted SLS programme manager John Honeycutt. “From building the test stands, support equipment and test articles to conducting the tests and analysing the data, it is remarkable work that will help send astronauts to the Moon.”

The SLS structural test programme started in May 2017 and was the largest such programme at Marshall SFC since the space shuttle programme more than 30 years previously. Five different component structures of the SLS were subject to 199 separate tests, generating 421 gigabytes of data, which were then applied to the computer models used to design the rocket.

“The Marshall test lab team has worked closely with the Space Launch System Programme to test the rocket’s structures from the top to bottom,” reported Marshall SFC test lab director Ralph Carruth. “After watching the test stands being built, working alongside SLS and Boeing engineers to establish testing procedures and conducting and gathering results of five structural qualifying tests, we are proud to contribute data [which] shows these structures can withstand the rigours of flight.”